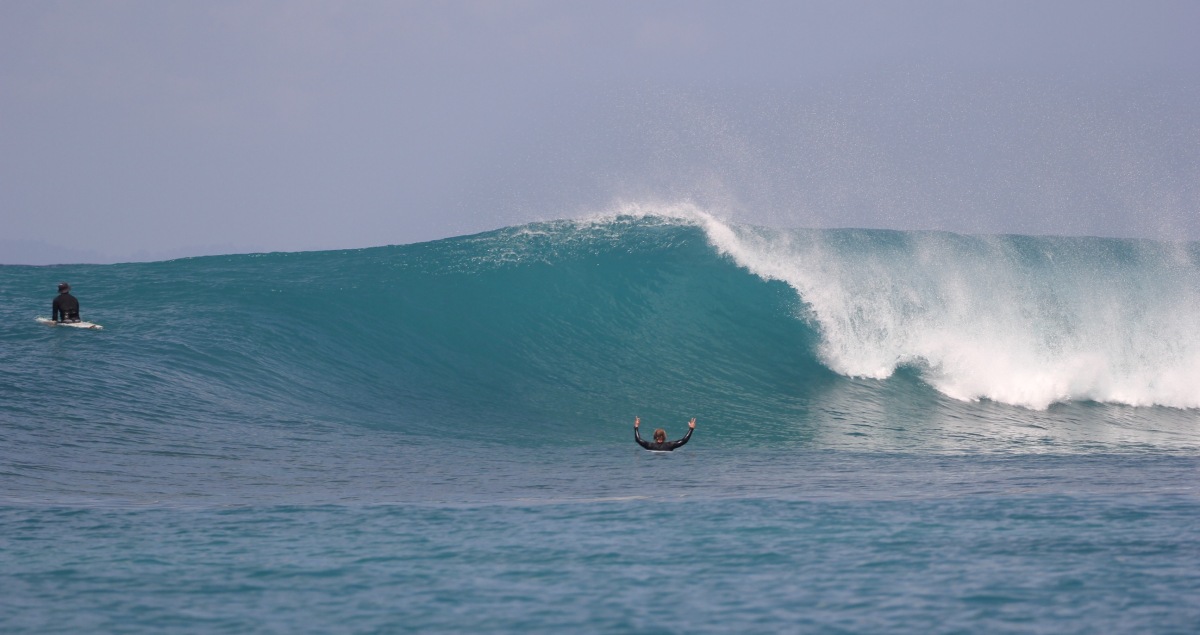 It’s the fifth day or our Indonesian surf trip, my third session in the water today, my body is exhausted. The swell is strong, my decision making is not, and I now find myself flat-footed in the tracks of a freight train of a wave that traveled 2000km to give me a beating.

We’re at a spot called Lebah. We surfed it yesterday with some success, each of us scoring a few great waves despite a small crowd. It’s a fast wave that can be really fun in the right conditions.

Today, those conditions are being described as “Teahupoo-like.” For the surfers out there, you know what this means. For the non-surfers, the best way I can describe it is that the ocean seems to just stand up out of nowhere to create a fast, powerful wave very quickly, which is thick, unforgiving, and about to unload all of its energy over a shallow coral reef (or just look at these pics).

Of course, you can really only experience this from the water. From the boat, at an angle, the waves look decent. Fun, even. With the swell jacking up to 10 and 15 feet at some breaks, this spot, only somewhere in the “overhead” range, looks manageable. I grab my board and paddle out with James, an Englishman, and our Australian surf-guide, Brayo, to join a few Kiwis and Aussies who had caught a few waves already.

We get out to the lineup and a set steams our way. We all paddle like hell to make it over or under the breaking waves. Brayo, a lifeguard and paramedic by training, notes, “You wouldn’t want to get caught under that” and we all agree strongly.

Still, Brayo is an excellent surfer and in a quick few minutes he snags one or two waves before heading back to the boat. James tries for a few with little luck before sliding down the lineup to the shoulder on the inside, hoping for a small corner of a wave, and then disappearing from the water altogether. A couple of Kiwis sit through a few sets, reference Teahupoo, and then disappear.

I’m left in the lineup with one Kiwi, a smooth veteran surfer, and one Aussie, a young charger who was ripping.

I am neither smooth, nor do I rip.

I humbly/begrudgingly admit that I’m a pretty average surfer. Comfortable in the water, decent fitness, able to catch and surf waves, occasionally making some nice turns or getting barrelled… but I rarely make out of aforementioned barrels, I still get scared when dropping into big/steep waves, and I continue to be a headcase when it comes to my confidence level as a surfer.

These are all the excuses I would use to explain my poor surfing, if I didn’t already know that none of them are actually an excuse for poor surfing:

Indeed, I’m fairly certain I have surfed more this week than any other week in my life. Upwards of 5-6 hours in the water each day. Rinse. Eat. Sleep. Repeat.

Anyway, I am struggling to catch waves. I’m not quick enough to pick the wave up deep inside and get down the line before it completely warps into a monster, but I’m finding it impossible to catch the wave on the shoulder. I know that I need to be “right on” the breaking wave but that just seems like death, and I don’t want to burden Annie (safely, smartly hanging in the boat for this session), with my body in an extra bag on a flight home.

Determination/stupidity gets the best of me. I keep trying for waves, seemingly getting closer to making it. Everyone is back in the boat already, and I’m getting more impatient with myself. The lulls between sets don’t help with my mental game.

Finally, a medium sized pulse comes my way and I go hard. Try as I might, I can’t match the wave’s speed. I miss it. I turn around to paddle back out when I realize the mistake I’ve made and the trouble I’m in.

The mistake was going for the first wave in a set. The trouble I’m in is that the following wave is going to detonate on my head in a matter of seconds, and it’s just the second in a set of six.

In this situation, there is no way out. There is no flight. Just fight. I’m square in the impact zone, and this wave seems to be a bit larger, a bit gnarlier than its friends. Riding out the whitewash would mean I’d be smashed into the reef and rocky shore. Paddling for the shoulder is futile. I’m too deep inside.

I dig in and paddle hard towards the oncoming monster. I remember some breath training and try to take a couple deep, calming breaths before it hits me.

I duck-dive, but it’s pointless. I am fucked.

The wall of water hits the reef, its geometric curves shattered, and throws me over backwards, tearing my board out of my hands. I spread my limbs and try to stay shallow, fearing hitting the reef, as my board, more buoyant than me, gets pulled by the whitewash, dragging me with it underwater.

The frothing water whips me around for as long as it pleases, my efforts useless, keeping the surface unpleasantly out of reach. I grab for my leash and pull to reach my board amongst the foam.

Another wave speeding my way… equally as unfriendly. I grab my board, lay flat, paddle once, the wave about to hit and knowing how shallow I probably am, I duck-dive very shallowly and bear hug my board. I remember the warning I read about duck-diving in Indo – to keep your hands on top of the board to spare your knuckles from grazing the reef. My arms are fully locked around the bottom of my board and I’m willing to scrape them up if it means my head, face, torso, avoids the reef. I go through the spin cycle underwater.

I get to the surface in time to see how close I’m getting to the shore, which is not a good thing. I paddle parallel to it, and the oncoming wave. I’m fully exhausted at this point, but don’t have time to consider it. There are still at least a few waves left in this set, and I’m not out yet. I get clipped and rolled again, but am now at least getting rag-dolled in the right direction, towards deeper water, and the boat.

Between the fourth and fifth wave, I can see the Kiwis on their boat, beers in hands, waving frantically for me to keep hustling out of there. I wasn’t thinking at this point. Just instinct. Paddling. Breathing.

I crest the shoulder of the fifth wave just in time to escape its grasp, to know that I’ll make it out of harm’s way. The sixth wave crashes behind me like a train derailing as I get into deep water, calmer seas, and a sense of relief flushes in.

My hearing returns and I hear cheering and applause from our two boats. I’m simultaneously embarrassed and proud. A session without catching any waves is frowned upon in surfing, but surviving a thrashing is a badge of honor.

The looks on everyone’s faces say it all. Annie’s especially. I’m apologetic for scaring her, and she’s supportive, at least saying that she believed I’d be ok… that the push-ups and breathing exercises I’d been doing in our tiny hostel rooms would pay off.

Brayo is particularly insightful that night as we discuss the myriad mysteries of surfing – the choices we make, the opportunities the universe presents to us, the timing and coincidences of being rocked by a set of waves generated 2000km away, days prior.

I get a shot of confidence from him, commending me for getting out there to begin with and on staying calm and in control throughout the whole ordeal. He says many people lose composure immediately. Another Aussie surf-lifesaver said that when he saw me get thrashed by the first wave, he reached for his rescue fins and thought to come get me.

Of course, despite having been a lifeguard myself, I didn’t feel in control. I never do in the ocean. That’s the beauty of it, of surfing. You can control for X all you want, but the ocean is going to do whatever it wants anyway. Curse the maelstrom as you may, the ocean has no feelings about you one way or another. It just is. You just have to get through it.

Others commented on my beating. “I reckon it was the biggest of the day,” says another Aussie surf guide, Robbie. Whether true or whether they are just being kind to my bruised ego, I appreciated it, etched this whole ordeal into my memory, and am now in bed early.

After all, there will be waves tomorrow.

[A version of this post originally appeared in my newsletter].