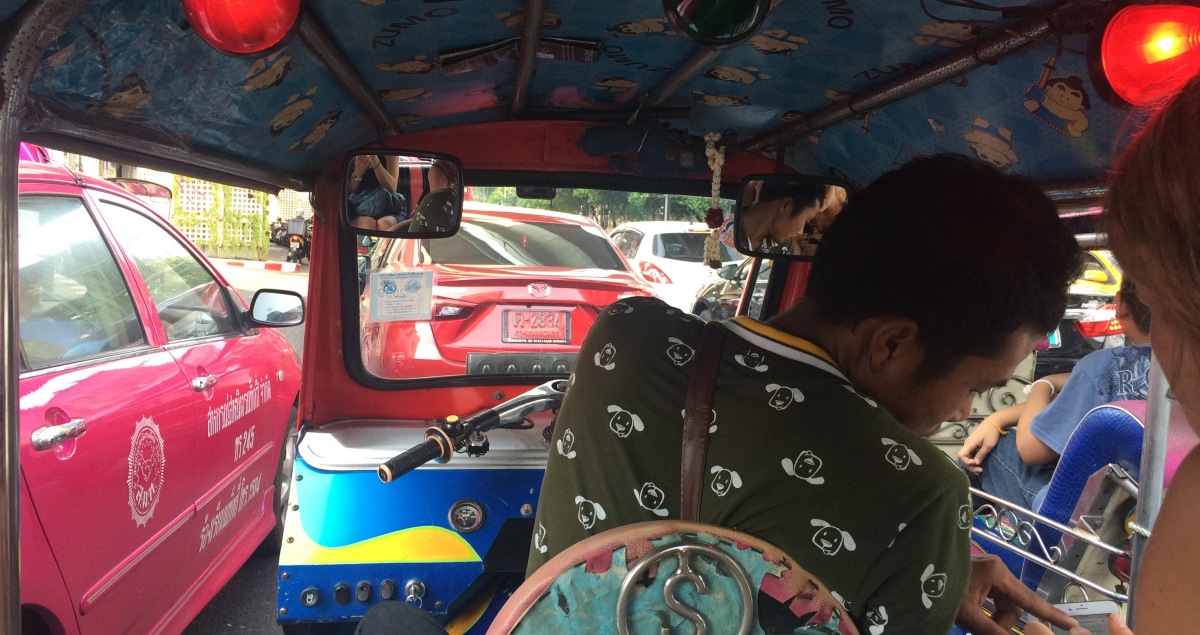 Since we had come across so many college backpackers, fresh from Thailand, with their patchy sunburns and hangovers I kind of thought Thailand would be easy, thoughtless travel. But after a few sweaty bus rides (and sweaty hikes and sleepless nights), plucking a leech off my foot, getting rained on in bed, and sidestepping face-sized spiders in a cave, I realized there is of course off-the-beaten-track adventure to be had. Certainly there are very touristy areas (Khaosan Road is apparently that in Bangkok), where those who salivate for a good party can drink and dance away their vacation, but there’s also jungle huts and mountain peaks and underwater wrecks to explore. We spent two nights in Bangkok, one in Khao Lak, one in Khao Sok National Park, one on Cheow Lan Lake (in Khao Sok National Park), three in Phuket, and another two in Bangkok.

Thanks to a B, a good friend from school who had been living in Thailand, we got a more “local” experience. We balanced out the non-stop eating with walking around in skin-melting heat. I was surprised by how developed, futuristic, and expansive some areas of the city are, while other neighborhoods are packed with low-lying makeshift homes and businesses, crisscrossed by narrow streets. It’s easy to weave your way through both in an afternoon’s walk – from a highly air conditioned mall, onto a modern subway, and through narrow side streets lined with food stalls. We found that wherever we were people were genuinely nice, and the food was delicious, safe, and cheap.

There are temples, spirit houses, and larger than life Buddhas tucked all over the city. Flowers, sweet drinks and fruits are offered to them daily. Walking around and getting mildly lost is a great way to discover these sweet little details. 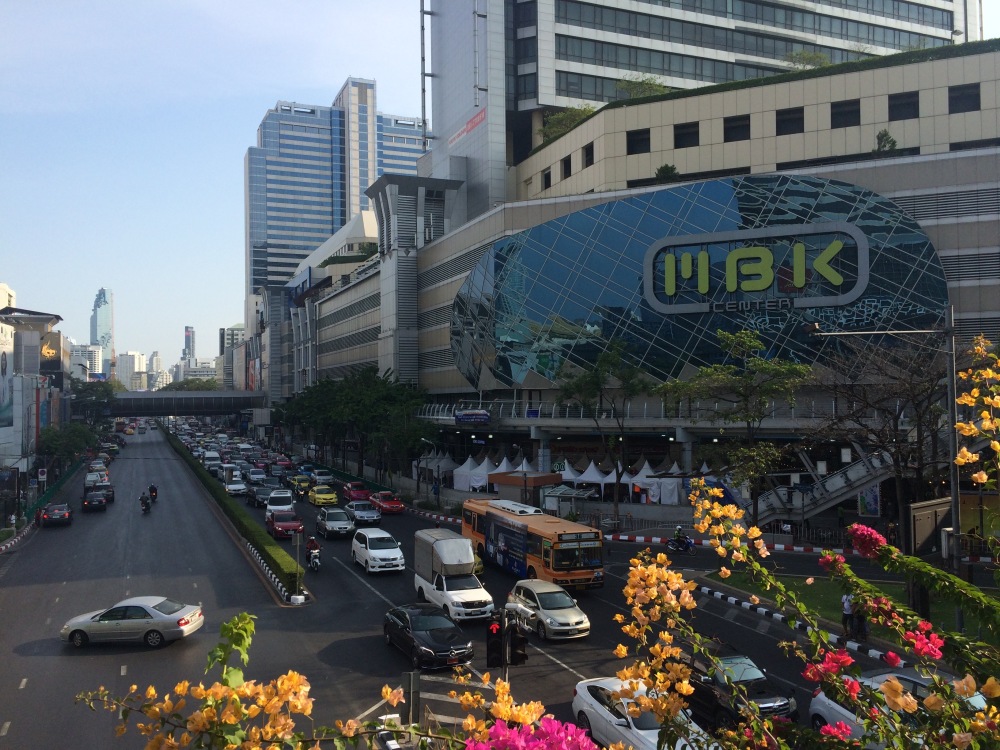 Getting Around
Transportation is pretty solid in Bangkok. To get around locally there are super cheap taxis, tuktuks, and motorbike taxis. And the subway is very nice – clean, AC, TVs! We found that taxi drivers are picky about where they go, and sometimes we’d have to ask five taxis before landing one that wanted to head in our direction. Before you hop in a cab get an idea of what it’ll cost, so you’re not stuck with a bloated price at the end.

To get any great distance there are cheap internal flights, sleeper trains, public buses that you can hail down and VIP mini buses that you can book tickets for in advance. If we had more time, an overnight train would have been a fun option, but we opted for a cheaper (and quicker) flight with Nok Air to head south. Once we got to the south we hopped on different local buses, which seemed to run frequently in between the locations we were visiting.
Eating
Hygienic standards are very high when it comes to handling food. This is not the case for bathrooms, which often lack toilet paper and soap FYI – you’d think the two literally go hand in hand. We took B’s advice and ate freely from street stands and restaurants and had no stomach troubles. B took us to a bunch of local spots we wouldn’t have found on Foursquare or Lonely Planet – two of our faves were Kai Ton Pratunam for chicken and rice and Sabaijai Kebtawan for Tom Yum soup. Thai people take spiciness to another level, best to request mild on spices.

To Do
We had a fun day trip to Koh Kret, an island in the Chao Praya River. We hopped on the ferry, which makes frequent stops along the way to pick up passengers – 45 minutes and two bhat later we arrived. The ferry drops off in the bustling market area, full of pottery, trinkets and sweets in all gelatinous shapes and sizes. From there you can walk the 4km around the island or rent bikes. It was definitely worth a visit. We stopped for a beer at Chit Beer, one of the only craft breweries in Bangkok, which felt like a miniature replica of a Long Island beach bar, packed with young Thai and a few travelers. I imagined Anthony Bourdain making a visit, revealing this gem to the world. The congenial owner – Chit himself – gave us the rundown. He spends his weekends on the island working on this passion, while working full time as an IT professor during the week. 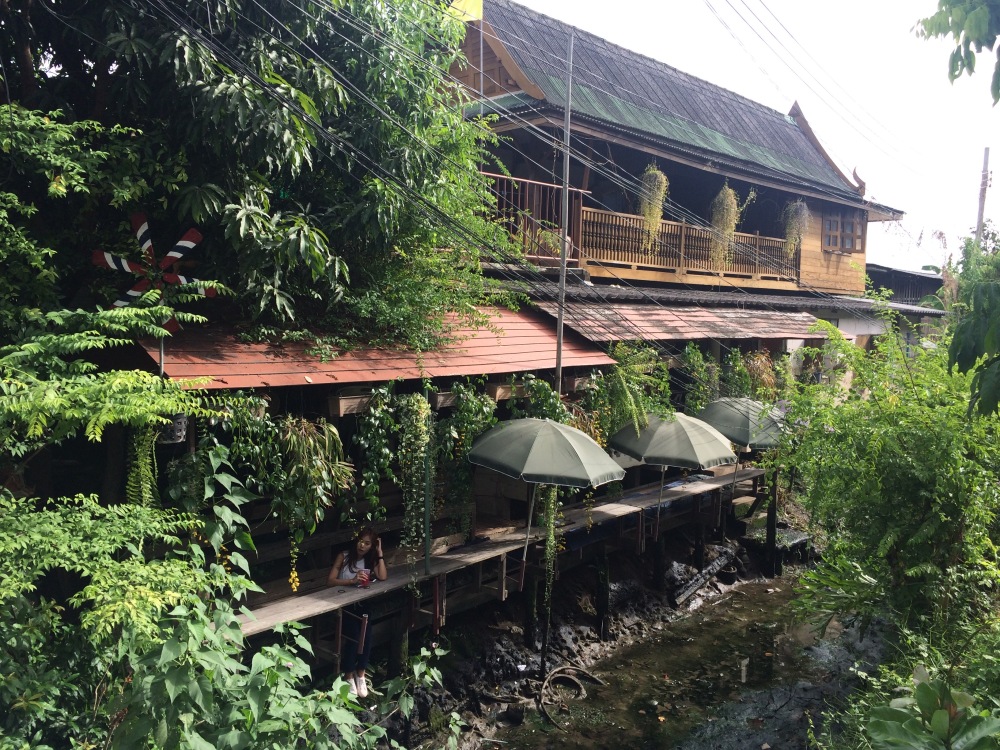 Massages are normal for locals and tourists alike. Sorta restful, sorta painful, but only about $8 for an hour. We also visited the Museum of Contemporary Art, which has rotating exhibits, worth a trip (plus it’s a nice AC break). We wandered the Chatuchak Weekend Market, which had everything unnecessary but awesome like pineapple print tees, soap shaped like boobs, iPod covers in every color, and stands offering mango smoothies and cellophane bags piled high with perfectly sliced fruit. We wedged ourselves into an arena packed with mostly older Thai men to watch Muay Thai. Not my favorite sport, but still really interesting to watch – the boxers artfully knock each other out, but respectfully bow and hug each other before and after each match. More interesting than the fighting was the blatant gambling going on – gambling is illegal in Thailand – and all the muffled chatter and hand gestures signifying something to someone. 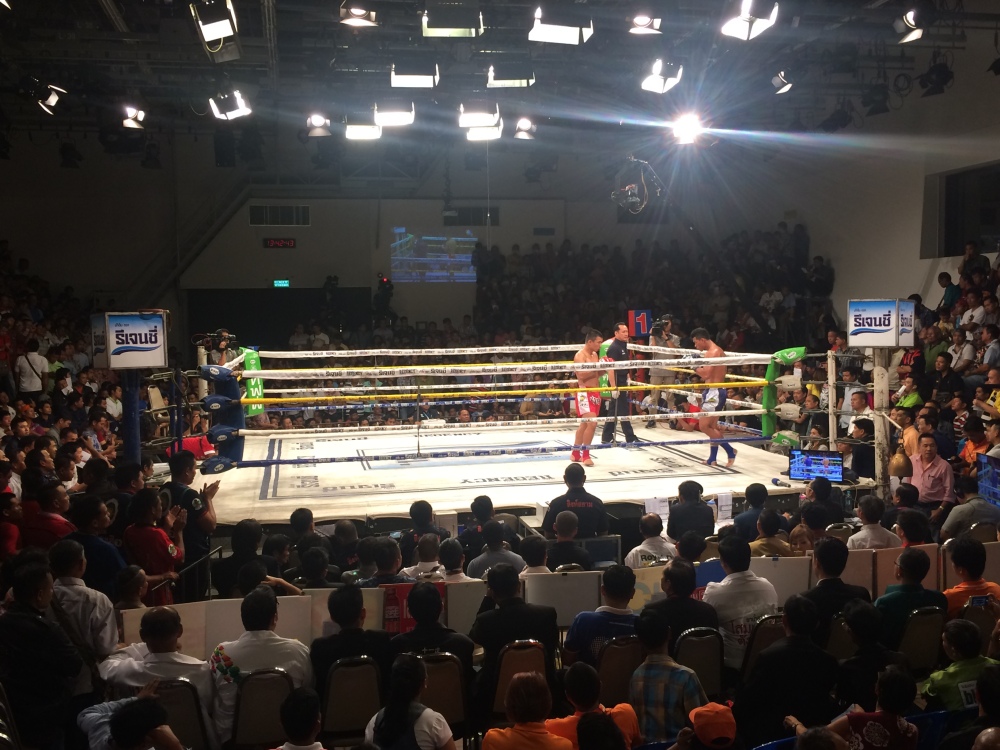 From Bangkok we flew south to Khao Lak in search of scuba (though we missed the season by one day argh!), then a three hour drive to Khao Sok National Park to stay in a floating hut on Cheow Lan Lake, and then to Phuket for surfing and scuba.