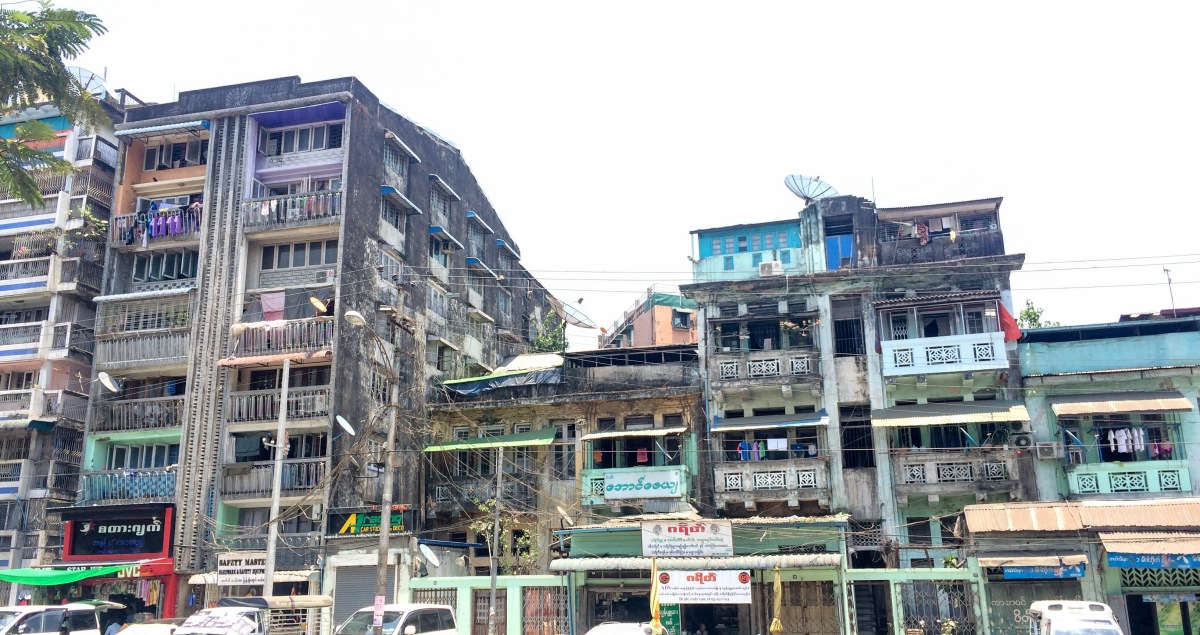 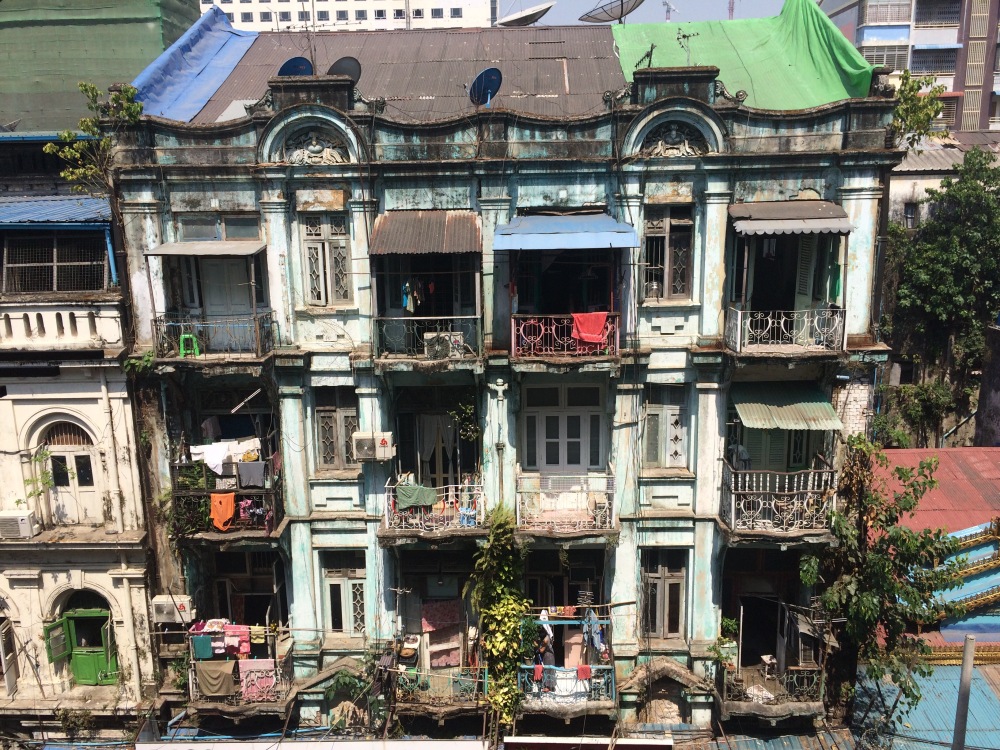 Yangon was hot and moist like it was left to age and mildew in the jungle among giant palm fronds and ancient drip castle temples. Coming from the smog of Kathmandu we felt refreshed by the breathable air and trash-free streets. On our way from the airport our taxi driver pointed out one thing, THE thing to visit in Yangon, the Shwedagon Pagoda. You can spot the gold gilded point from all around the city, day and night. We quickly learned how central Buddhism and associated cultural traditions are even in this very busy city. We’ve found that many cities we’ve visited, with more diverse demographics and access to media and technology, are not all that different from our city, New York. But, the culture in Yangon was noticeably strong and relatively unperturbed by Western influence.
We certainly stood out by our looks and clothes (a dead giveaway was Reece was not wearing a skirt…and he has a beard), but no one seemed to give us any special attention. It was refreshing – we got to step into a new world to us and watch it function without feeling targeted or uncomfortable. This is probably because Myanmar has only been open to and encouraging of tourism for the past few years. After visiting Inle Lake and Bagan, we realized that Myanmar does have a lot of tourists in the form of young backpackers, but in the city they just get absorbed into the larger population and we rarely saw each other. We liked Yangon. It’s worth at least a full day and night, before jetting onto the next stop.

Likely influenced by the Buddhism and Hinduism, people are very polite, welcoming, and respectful. Many people know at least a little English in the touristed areas, so we were able to get around. But without many in depth conversations we felt like we left with a lot of unanswered questions. It’s a totally bubbly looking language, so we had no chance of learning it in a week, but the basics like “thank you” are appreciated. When handing or taking something from someone we learned that it’s polite to use your right arm for the exchange, touching your right elbow with your left hand at the same time. Don’t touch someone’s sacred head and don’t point or show your dirty feet to someone.

It’s a very conservative culture, so make sure to cover up, no short shorts or tank tops. Most women wear floor-length short sleeve dresses and men wear skirts and a t-shirt. While no old lady is going to whack you with her stool for showing some leg, it’s just disrespectful and might make someone uncomfortable. In the more densely touristed areas like Bagan and Nyaung Shwe (Inle Lake) the town is full of young backpackers in short shorts. While it’s still rude to not respect the local culture, you can get away with it. When visiting temples or monasteries though women and men have to cover shoulders and knees, and take off caps and shoes. Given the 100+ degrees weather, covering up with mildly suffocating, so picking up a pair of what we call the “elephant pants” (the unflattering flowy elephant print pants every backpacker wears) or trying a longyi are recommended. It even felt inappropriate to run in shorts, so we found two gyms and ran outside only at night.

Yangon International is where all flights come in and out of – the domestic flights depart from the building furthest to the right. There are many options for day or night buses and flights are fairly cheap. We read many blogs that claimed all transportation is doomed to crash, but we had no real issues. We flew from Yangon to Heho (Inle Lake), day bused to Bagan, then night bused to Yangon. The flight was easy, the day bus was bumpy and nauseating (would be tough for anyone that gets car sick), the night bus was easy and comfortable (reclining seats with personal tvs!). Maybe we had low expectations going in, so everything seemed manageable, even comfortable….except the heat. 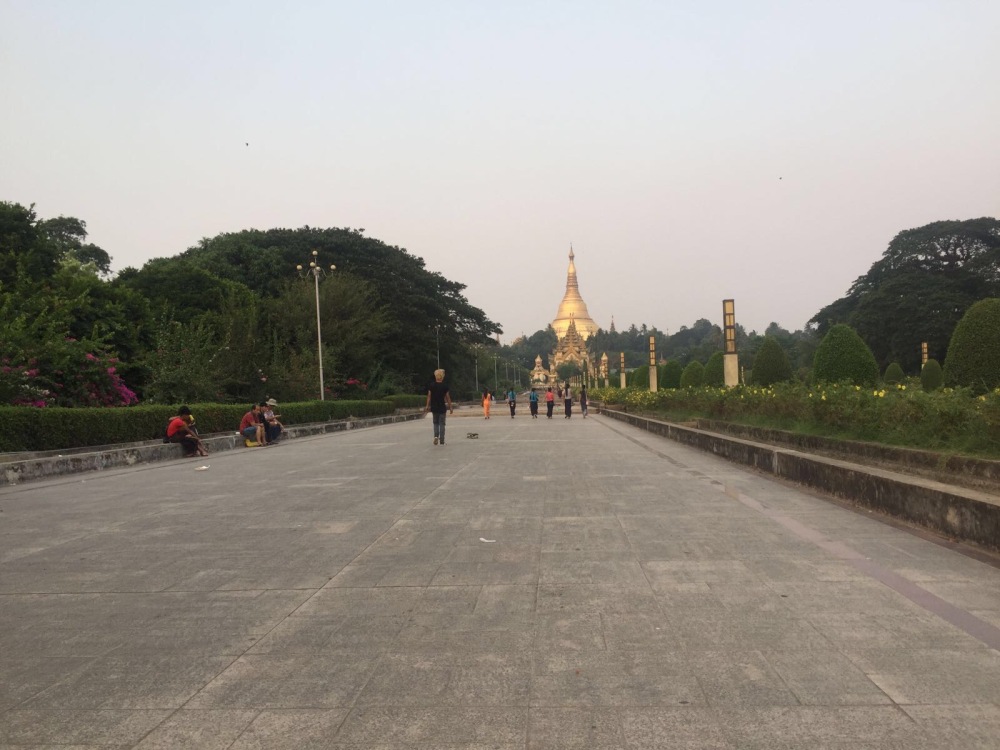 If you haven’t sweat enough just carrying your backpack, there’s opportunity to exercise in Yangon. There are two big lakes and a park that have quieter roads/paths to run along in the morning (bring a few dollars in case you need to pay for entry). We stayed near People’s Park which is a nice green park next to the Shwedagon Pagoda for a walk or run. There are also a ton of gyms, some tiny rooms with rusty machines and some are in hotels decked out with TVs and AC. We splurged for a session at Balance Fitness near the American Embassy, which was a stretch at $20, but felt worth it – it has tons of treadmills, weights, matts, nice machines, lockers, towels and nice showers. On the other hand, we also went to a local gym the size of a New York bedroom with ancient machines, one treadmill, frequent power outages, and a barefoot policy. We felt silly bargaining from 3000 to 2500 each, but they charged other travelers in our hostel 2000 each. Still, we got in a good sweat. Part of the reason we sought out gyms was because I felt uncomfortable running outside in shorts and a tank – no one seemed to mind some leg in the gyms.

We were constantly hungry in Myanmar, a mix of dehydration and the heat, so we were always in seek of a meal. Good thing food is very affordable. We ate at a mix of local and “western” spots and everything was delicious, warm and spicy, with influence from Myanmar, Thailand, India, and China. There is tons of street food, quick snacks to eat on the go (pancakes, fried eggs, samosas), or deep dishes of rice or noodle to slurp while sitting in tiny plastic chairs on the sidewalks. All the stands looked impressively clean, which we’ve learned is common across SE Asia. We ate a few snacks on the street, but mostly ate in restaurants. Thone Pan Hla was our first taste of a local eatery, where we had tea and politely refused the fried rice balls someone offeredus. Rangoon Tea House was a great “western” spot, which Reece described as “Manhattan’s attempt at a hipster Brookyn restaurant,” with raw wood tables, great coffee and chambray-clad servers. We hid out here for a few hours of writing and interneting – tea leaf salad and bao were our favorites. Circles Cafe was similarly a cool place to have meetings and work, though the wifi was mediocre. One night we wandered into a very local Indian restaurant and the waiter plopped down a plate of what looked like Dhal Bat, kept offering us refills of rice and curry, which we eventually turned down, and was so thrilled foreigners were dining there that he refused our offer of a tip.

We stayed in two hostels on our way in and out of Yangon. Chan Myae Guest House was in a great area for wandering by foot, breakfast included, nice staff, very clean, AC. The only downsides were no windows on the room and that it’s maybe a seven floor walkup. Pickled Tea Hostel was a better hostel, immaculately clean, crisp white sheets and spa-like overhead showers, but was in a quieter neighborhood on the edge of People’s Park, a little further from the street life. They also let us check in way early at 6am after a night bus, so we are indebted to them for those few extra hours of deep sleep. Both good options for budget travelers.

Walk around the Pabedan neighborhood, sample street food, visit the pagoda and People’s Park. We always gravitate toward water, but the smaller lake was an icky algae green and avoidable, we didn’t visit the larger one. Bogyoke Market is full of crafts, antiques and tailors – the Chin Chili Myanmar Folk Art shop on the second floor all the way at the end is a must-visit if you have space for textiles in your suitcase.