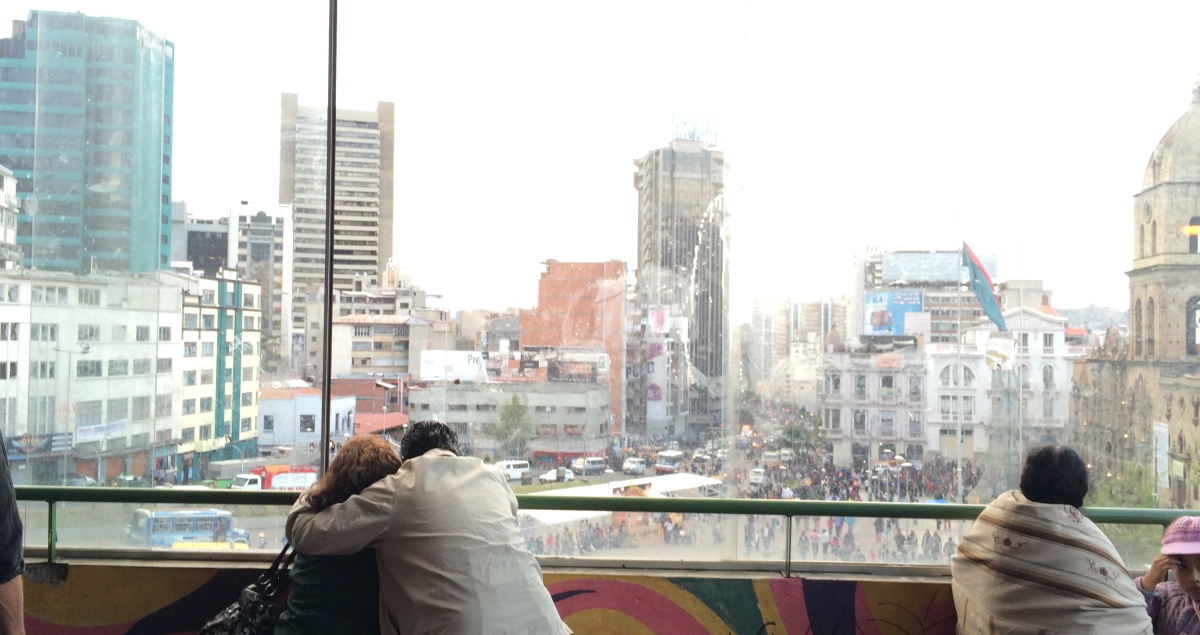 From above it looks like an intricate blanket was laid out over the edge of a plateau. Drawn down by gravity, homes spill into every crevice of the harsh mountainside, stacked all the way down to the valley where central La Paz lies 500m below. The airport (on the plateau, called El Alto) was super calm and the temperature warm and inviting. With no trouble we plopped our bags on top of a shared minivan and, with 13 or so other people packed in, we careened down and around into central La Paz (the view is incredible from the highway). We got dropped at our hostel, albeit on the highway, and the incessant beeping, smog from the cars and people zig zagging in all directions began.
La Paz is a whirlwind of a place. Because of the pristine jungle a quick flight away, the adrenaline excursions like biking the Death Road and repelling down the face of a building are within reach, the city is bustling with adventurous young backpackers (though we did see a hip 60-something woman, so stylish, backpacking on her own, too). Aside from the guided excursions, the city itself has no infrastructure for tourism, which makes it an exciting place to be, but also uncomfortable. More than anywhere else, we had to be careful with our belongings, the locals we befriended, crossing the road, eating food in the markets (damn, we ended up getting sick anyway).
We wandered our way though the parking garage turned indoor food market and sampled everything we felt was “safe” along the way. Part of the market is occupied by very little women who each have a very little restaurant (named after themselves) that fit 5 very little people.

We learned from locals about the corruption in the government and how the current President -Evo Morales – is changing laws to stay in power and using strange strategies to get women to increase the population, making all our presidential candidates look not as bad (well…). We also learned that being a strong and muscular woman, able to carry babies on one side and bags of produce on the other is culturally attractive. How the traditional women sport their shrunken hat (an accidental shipment of tiny bowler hats from Europe was absorbed into the Bolivian traditional garb) signifies their status. If the hat is on the top they are taken, if to the side they are looking, and if to the back, it’s complicated. Who knew?

We had a few busy days in La Paz then took a small flight to Rurrenebaque, where la selva and Pampas tours take off from. We opted for three days on the Pampas because we heard from blogs and other travelers that you see far more animals than la selva and after our trip we’d have to agree.