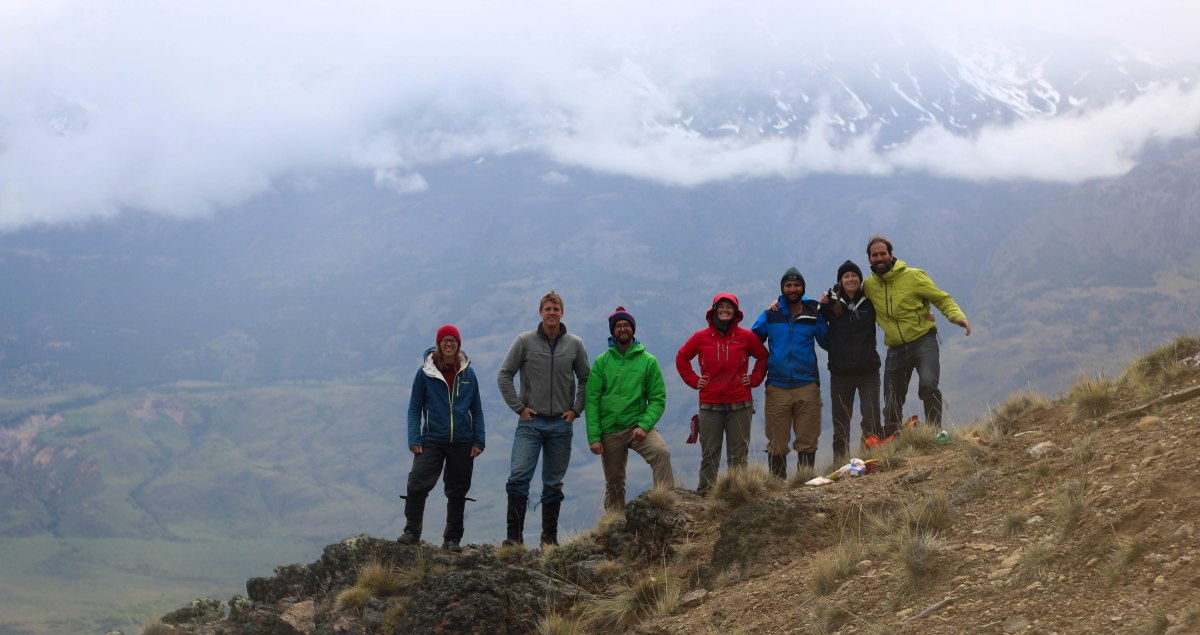 This is post one of four on our volunteer experience with Conservaçion Patagonica.

Note: Since our experience and the writing of this post, you may have heard the news of the unfortunate death of one of the founders of the park – Doug Tompkins – in a kayaking incident in Patagonia. Just weeks before he passed away, we were fortunate enough to briefly meet Doug and his wife Kris as they hosted all of us volunteers and some of the park staff for a wonderful Thanksgiving dinner. While I can’t say that I got to know Doug personally that night, I can say that while his death is truly sad, his legacy is truly great — leaving behind a wonderfully conserved park for generations to enjoy true wilderness. Glad to see the park is making progress with the Chilean government, too.

As our Chilean bus driver sped down the windy dirt road, steep cliffs dropping off (just a little too close for comfort) to our right, cerulean blue water flowing at the nadir of the valley, our sole other passenger a stranger who would soon become a friend… I realized I had only the faintest notion of what Annie and I would be doing for the next three weeks as volunteers at Parque Patagonia.

Sure, we’d done some homework, but our time as volunteers would only be a fraction of this great adventure, so the actual program (and planning) itself took a backseat to getting there in the first place. Suffice to say, we got to the park (after many, many hours on buses), and eagerly dug into our mission as volunteers – helping build a national park in Patagonia.

As the first group of volunteers for the summer season, we were all Americans (there are usually more Chileans but only after the holidays). A doctor on sabbatical, a river guide in her off-season, a hiker from Wisconsin/Portland, a climber from Chicago/Seattle… and us. A couple fish out of water from Rockaway.

Our team bonded right away, eagerly helping one another, commiserating about travel experiences to get to the park (in the middle of nowhere), and generally making fun of Ben (he could take it, and dished it as much as anyone!). It was awesome to be around such great people, because the next few weeks would find us in close quarters, all the time, under tough conditions.

The volunteer program started ~15 years ago, and is (somewhat surprisingly) crucial to the park’s success. As volunteers, we do some of the work that is tougher to tackle and requires that “je ne sais quoi” that compels one to donate their time to hard manual labor in remote areas of the park. The volunteers are at work for about three weeks at a time each season. Their projects depend on the season and what’s needed in the park at the time, but generally involve invasive species removal, fence removal, and some work with livestock. The volunteers camp during their entire stay in the park, and as the first group of the year, we were lucky. We got to go up and camp in the mountains while the streams were still running (only the first two groups get to go up in the mountains), and this meant we did fence removal for a week, before tackling the other challenges.

The Parque itself is on former ranch land. Thus, there are miles and miles of fence that prevents animals from migrating naturally (thereby limiting biodiversity among species). Often, animals are caught in the fence, and die. So our first mission was to remove as much fencing as we could. Each morning we’d hike up to the fence and set to work. A couple people would clip the staples along the fence posts, others would coil up the loose wire, and then we’d make piles of fence posts for the gauchos to come collect. As we made more progress, our hikes to and from our work site got longer, and our terrain changed from steep grades, to thick forests, across streams, and back to open hillside. Considering the challenge of the work, our team really kicked ass. We kept a really positive attitude, working hard while joking around, and as a result we were able to remove a few miles of fencing, resulting in some solid kudos from Daniel – the gaucho who picked up our gear at the end of our week.

While tough work, I found fence removal really gratifying. Each day, our hike to the site got longer, but that’s because we’d done great work the day before. And on our hike home, we walked along the now-removed fence line, seeing all of our efforts clearly making an impact. Indeed, we witnessed guanaco crossing where the fence used to be and cheered!

Perhaps it was the clarity of the job. Having spent the last 8 years in technology startups, where everything changes all the time, where goals, strategies, and execution are all fickle and intangible, doing manual labor was just so straightforward. I loved knowing the goal and just going after it. Indeed, I often found myself hundreds of yards ahead of the group clearing brush and cutting fence staples trying to gain more ground.

It was also fun to work together, with such a small team again. The last year in corporate America had me feeling like a cog in a giant machine that I couldn’t control. By contrast, our small team was nimble, fun loving, and efficient as hell. Couldn’t have had more fun out there.

Always funny is how close you can get to people who are essentially strangers. On long hikes, snack breaks, and cold nights we all shared myriad stories of our past, present, and future selves.

I’ll admit that Annie and I couldn’t keep up with the camp games going on in the tent. Ben, Ella, Alex, and Nate had some serious card-skills… but we still enjoyed the laughter and overall vibes. Cooking became a big part of each night… trying to make the most of limited ingredients for famished friends.

We knew Patagonia would be cold in November, but it should be warming up as summer started. Needless to say, we were a bit surprised when it snowed one night… and then again another night! Perfect for snowball fights though.