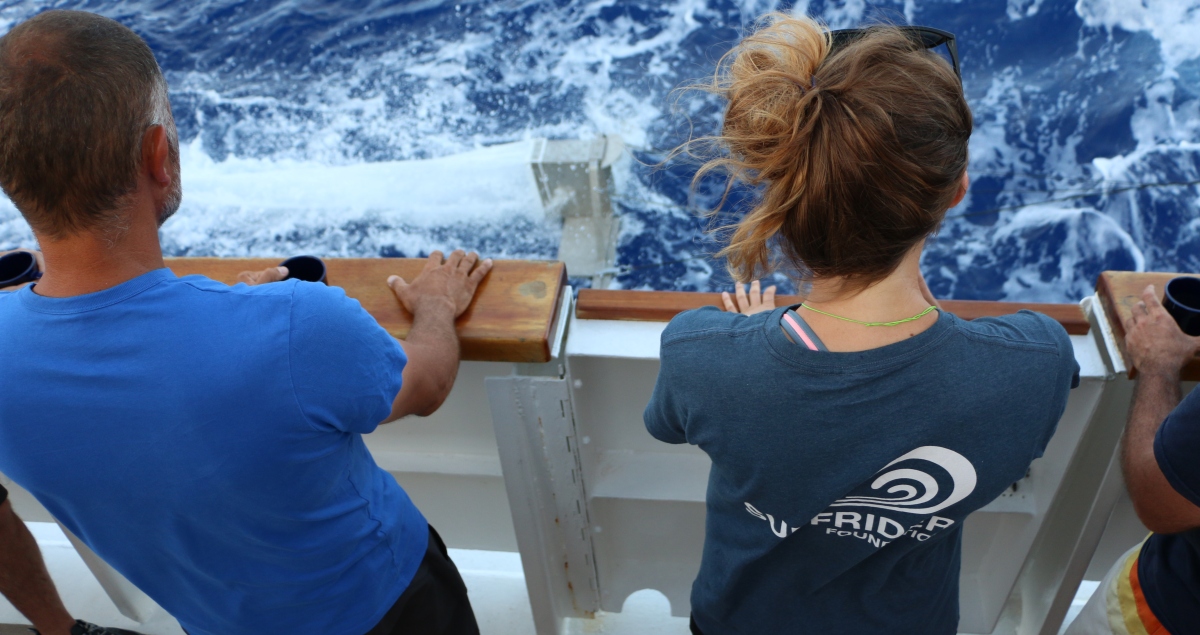 We only just set sail from Bermuda aboard The Schooner Mystic, and everyone is more than eager to drop the trawl we heard so much about. The manta-trawl, as named by its creator and one of the cofounders of The 5 Gyres Institute, Marcus Eriksen, is a homemade device, meant to skim the ocean’s surface at sailing speed while sifting out microscopic fragments of plastic pollution.

From where we stand on deck — miles from Bermuda and hundreds of miles from the mainland — it is hard to believe we will find much plastic in the trawl. And looking out at the pure blue ocean, we certainly can’t see any garbage, let alone the infamous “islands of trash” we occasionally hear about. No plastic bags. No plastic bottles. Not even a lost buoy. In plain sight, there is nothing to see.

But after we pull the first trawl, rinse out the seaweed, and sort the sample, one thing is abundantly clear — there is a ton of plastic in our ocean.

Make that 270,000 metric tons, actually. At least, that’s the estimate Marcus and his team at The 5 Gyres Institute have come up with, adding further that the plastic isn’t collecting in convenient “islands.” It’s more like “smog” and it’s everywhere.

[Shot (and roughly edited) this while out to sea.]

And they should know. Of the research groups studying the ocean plastic crisis,* 5 Gyres is the only team who has sailed to every one of the plastic gyres in our oceans. This expedition, Sea Change 2015, is their sixteenth, their largest, and arguably poised to make the greatest impression with a crew boasting a university professor, a plastics PhD, an EPA employee, a recycling plant CEO, National Geographic journalists, Patagonia ambassadors, musician/filmmaker Jack Johnson, and more…

Yeah. We feel a little out of place at first. Two lowly surfers from Rockaway Beach, NYC. Sure – we were board members for Surfrider Foundation, NYC, and yes, Annie is a large reason we have a water testing program in Rockaway, and yes as surfers we see plenty of trash in the water (especially in NYC)… but we certainly didn’t feel as expert as our fellow crew. Luckily for us, it doesn’t matter much. Everyone else is learning the data collection methods as we sail along, too. In fact, if Marcus has his way, he’ll train an entire army of “citizen scientists” to collect data around the world. The ocean is massive, and while he’s done as much open ocean research as anyone else, it’s still a tiny amount of data relative to the scale of the problem.

And the scale is massive. With every successive trawl, we pulled in more and more and more plastic. Even finding plastic fragments in the bellies of ~20% of the by-catch (small fish/squid etc. accidentally caught in our trawl). The plastic itself doesn’t necessarily kill that organism, but it attracts toxicants — substances like DDT and PCBs — and those toxins run up the food chain to us.

To sum it up so far:

It feels overwhelming. But there is hope. Between better product design, local/federal legislation, extended producer responsibility, and, importantly, better consumer responsibility (yes, that’s you!), we can drastically improve the condition of our oceans, and in turn, our planet.**

So if there’s one takeaway from this for you, dear reader (especially those of you in NYC) it’s to please reconsider that bottle of water, that plastic bag that holds your deli sandwich, or those Solo cups on the weekend. I know. I know… “but you recycle!” Sad to say, our recycling system just isn’t what we all like to think. The reality is that ~35% of what we (think we) recycle, still ends up in a landfill, or in an ocean.

Beyond the usual loose bag or bottle dropping off a recycling truck, our recycling process is simply too complicated – with multiple touch points (of failure), and lack of responsibility. In NYC, we have a large “MRF”, or Municipal Recycling Facility, with high speed conveyor belts and optical sorters, but even there, the end result is just a shipping container full of milk cartons. Those then need to be shipped to some other facility to be melted down into pellets, and then again to some other facility to be turned into product. As Mike Biddle, (founder of MBA Polymers – “the world leader at producing post-consumer recycled plastics from end-of-life durable goods”), explained in his presentation aboard The Mystic, the solution is in streamlining the system, bringing all the collection, sorting, and processing into one facility. The result is a much more pure product. Plastics sorted and processed at the particle level – ready for consumer production.

Man… I could go on and on about this stuff. About how plastic acts in the water column, about why the ocean array project is a horribly bad idea, about how developing countries are particularly bad contributors to the problem… after this trip, I dare say we are (close to) experts on the topic. Ok… maybe just gurus or something. Still, we learned a ton on the topic, and if you have any specific questions – please feel free to reach out to us. It’s an issue that is near and dear to our hearts. As surfers in particular, we’re really at risk. We ingest ~10x more ocean water than the average swimmer. That’s a scary when you think about all that micro plastic pollution floating around.

So before this post gets out of hand (too late?), I’ll touch on some of other highlights of the trip…

What you can do…

A day in the life on the Sea Change Expedition

0600-1200 “A” Watch on deck. Responsibilities include dropping, tracking, and pulling the trawl. Visual observations of macro-plastics. Assist ship crew with breakfast/lunch as needed. If wind, all hands to deck to hoist sails.

* Yes, I said crisis. While the problem is certainly out of sight, we cannot let it stay out of mind. Our oceans are choking on plastic.

** I say “improve” and not “fix” because I don’t believe it’s a simple fix. Complicated problems mean complicated solutions, and like the ocean, I believe our relation to our environment will be ever-changing. There is no “fix.” Just better processes given current information.